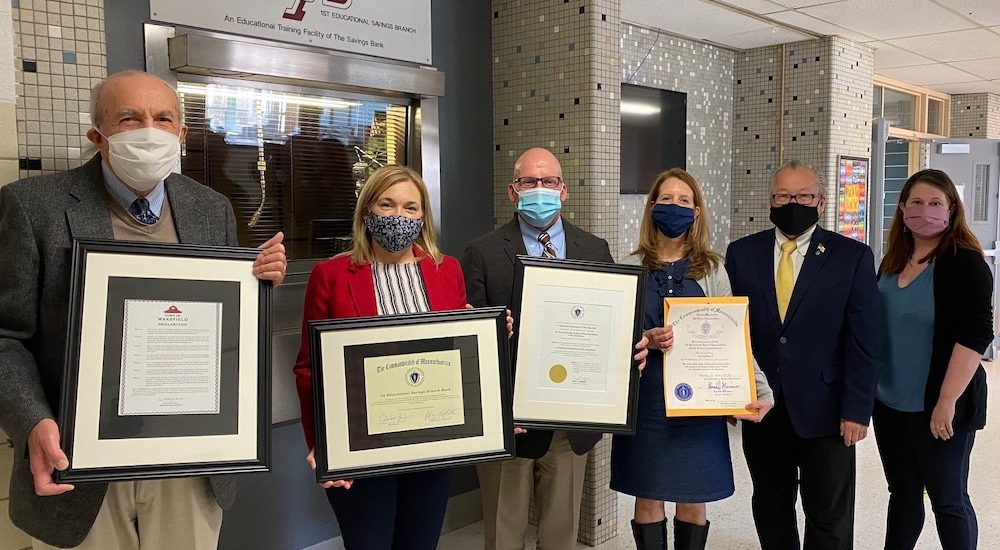 “The Savings Bank is proud of the accomplishments and the role that the 1st Educational Savings Branch of The Savings Bank has played in the lives of thousands of Wakefield students during the past 40 years,” Bob DiBella, President and Chief Executive Officer of The Savings Bank said following the Councilors vote. “The success of the student-operated banking facility and its longevity are testament to the founders’ vision. We are honored that the Town of Wakefield has recognized these accomplishments in this way.”

The 1st Educational Savings Branch of The Saving Bank opening on April 6, 1981 was the culmination of more than a year of preparation and planning by Bank and school personnel. The seed for a student banking facility was planted by then-Bank President Donald E. Garrant who envisioned a financial education program that would benefit students and the community. It was his vision that students would learn financial skills that would last a lifetime while potentially carving out career paths for those who were instrumental in operating the student bank each year.

The Savings Bank, known then as the Wakefield Savings Bank, requested a hearing from the Massachusetts Banking Commission in December 1980 setting the wheels in motion for approval of a student-operated and student-run banking facility at the high school. Students, Bank officers and staff, and school administrators and staff requested the hearing after more than 15 months of behind-the-scenes work. The group focused on the premise that although state law strictly regulated the creation of new banking facilities, a provision in the statute permitted an existing institution to establish a banking operation for educational purposes. In a first for the Banking Commission, a hearing was held outside its Boston office, and approval was granted soon after by Banking Commissioner Gerald Mulligan, creating the first student operated bank branch office in the country.

Its name was selected from among entries submitted by students and the student-operated banking branch opened its doors for business during lunch periods on Monday, April 6, 1981.

During its first years, the 1st Educational Savings Branch of The Savings Bank served as a model for other banks and financial institutions over the world. Bankers from as far away as Singapore and Dublin traveled to Wakefield to see the banking branch in operation in addition to those who came from all corners of the country to observe the student bankers at work.

“Not only was the First Educational Saving Branch a novel idea it was also a model from which other institutions learned from and brought back to their own communities,” Bank President DiBella added. “Students not only served as tellers taking deposits and making withdrawals, they were also loan officers who helped their fellow students, they also worked at The Savings Bank during the summer to prepare for the school year.

At the end of its first year, the student branch realized $100,000 in deposits and presented the School Department with $2,000. Since 1981, The Savings Bank and the First Educational Savings Branch have donated more than $77,850 to the Wakefield School Department.

“Because of Donald Garrant’s forward-thinking ideas, more than 150 Wakefield Memorial High School gained valuable experience as student officers, and thousands of students, not only WMHS students but all Wakefield students, had an opportunity to open bank accounts at their school. As a result of the success of First Ed, The Savings Bank created the Children Learning to Understand Banking (C.L.U.B.) at all elementary schools, the Galvin Middle School and St. Joseph’s School which was also coordinated with the help of the high school bankers.”

To honor the late Donald Garrant and his commitment to financial education and literacy, The Savings Bank established the Donald E. Garrant Foundation in 2001. The foundation has awarded financial grants to organizations and institutions in the communities served by the Bank, including $183,000 to financial education programs in Wakefield since its inception.

“It was the hard work of these three individuals and many students that brought the idea of a first-in-the-nation student banking branch to fruition,” he continued. “It is a tribute to them that the First Educational Savings Branch has continued to be a vital asset in the community.”

“Although the student-operated branch has been unable to open since March 2020, we hope to acknowledge and honor its founders and student officers at a later date when safe to do so,” Bank President DiBella concluded.

You are now leaving The Savings Bank

You will be redirected to

This website or its third-party tools process personal data. Read more about our use of cookies
×
Manage consent

This website uses cookies to improve your experience while you navigate through the website. Out of these, the cookies that are categorized as necessary are stored on your browser as they are essential for the working of basic functionalities of the website. We also use third-party cookies that help us analyze and understand how you use this website. These cookies will be stored in your browser only with your consent. You also have the option to opt-out of these cookies. But opting out of some of these cookies may affect your browsing experience.
Necessary Always Enabled
Necessary cookies are absolutely essential for the website to function properly. These cookies ensure basic functionalities and security features of the website, anonymously.
Functional
Functional cookies help to perform certain functionalities like sharing the content of the website on social media platforms, collect feedbacks, and other third-party features.
Performance
Performance cookies are used to understand and analyze the key performance indexes of the website which helps in delivering a better user experience for the visitors.
Analytics
Analytical cookies are used to understand how visitors interact with the website. These cookies help provide information on metrics the number of visitors, bounce rate, traffic source, etc.
Advertisement
Advertisement cookies are used to provide visitors with relevant ads and marketing campaigns. These cookies track visitors across websites and collect information to provide customized ads.
Others
Other uncategorized cookies are those that are being analyzed and have not been classified into a category as yet.
SAVE & ACCEPT
Powered by

We will be closed on Monday, July 4th in observance of Independence Day.
Skip to content